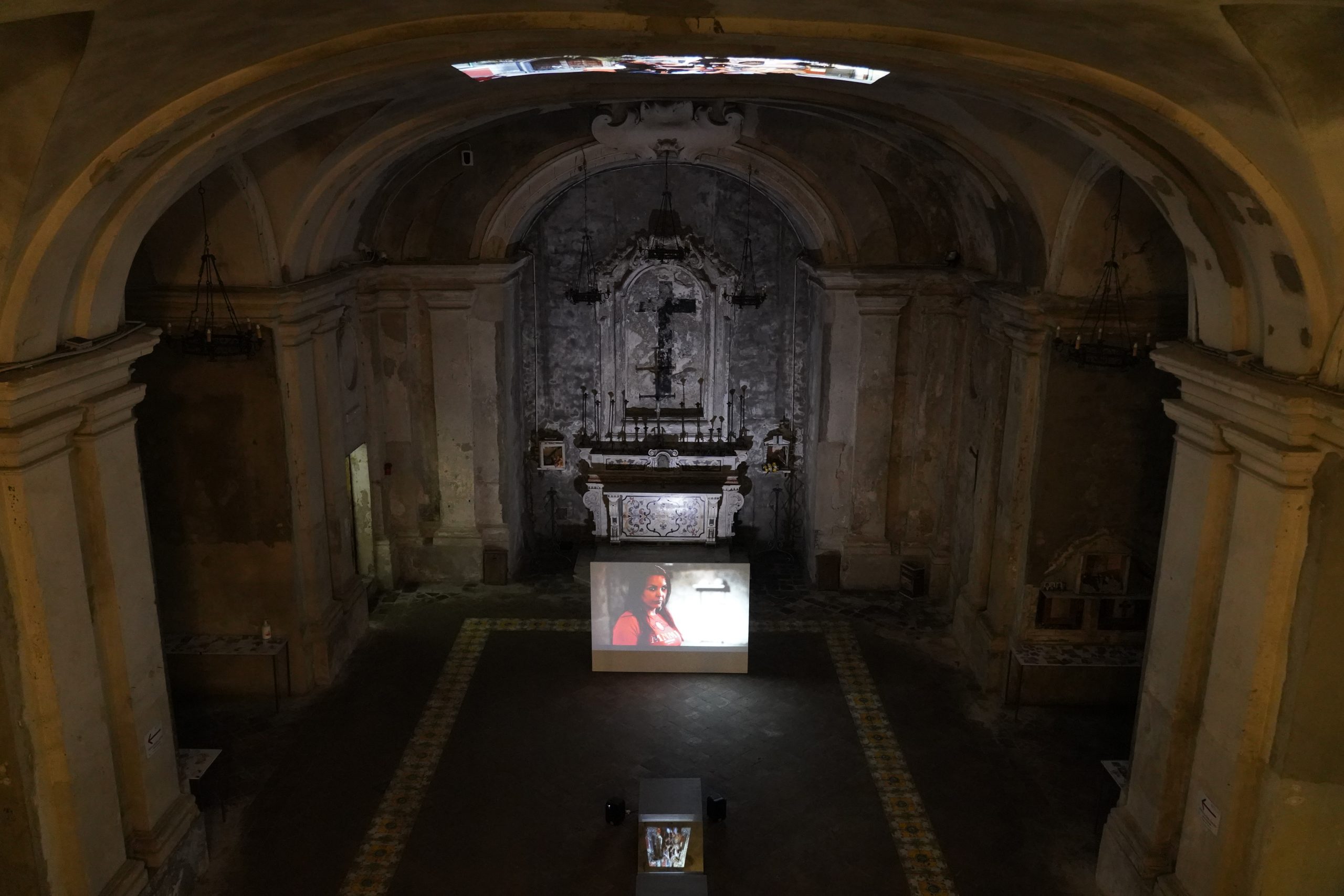 25 June – 25 July 2021
Monday – Saturday: 10 am – 2 pm
The exhibition will be open at other times by appointment:
complessomusealepurgatorio@gmail.com

The idea of “Il Cambiamento oltre il Visibile/The Change beyond the Visible” artist residency came to my mind during the first pandemic lockdown of 2020. There was widespread debate, both here and internationally, about what was missed during this time: social relation, closeness and social life. It was imagined that this new consciousness of what matters in life would bring change, even revolution.

Then, as now, when the pandemic could have been brought to an end (and yet, of course, it is still with us and we cannot know when, or even if it will be over) I recognized that many of these values and behaviors which, it was argued, were lost and should be rediscovered, were very much part of existing Neapolitan social convention. Even if Naples, like every contemporary city, lives with constant change, what seems to be fixed in the life of its inhabitants is the inescapable necessity of sociality.

In fact, if relations are part of human life, in Naples they are something that you live, in both sharing and confrontation, even as a visitor passing through because it comes with what you face in daily life, where everything: work and leisure, even the simple act of ordering a coffee, involves the negotiation of relationships which need attention, and a degree of involvement. Let’s say that you have to work very hard to live a lonely existence in Naples.

Of course, this reasoning can simply be seen as affirming a stereotype which Neapolitans readily imagine themselves as conforming to. But this dramatic time, when so many realities have been challenged, opens the way to examine the actuality of it and the complex, and not always comfortable, consequences that flow from it.

There has been another effect of the pandemic in that it has brought to the fore political, economic and social issues largely hidden in our lives which may now be seen to have been taken up by the accelerated cycle of work and “leisure” – societies drive towards production/consumption. This time of pause was the perfect moment to reflect on the complex Neapolitan reality, which, as very often, highlights problems shared by many other societies but in significantly more dramatic ways.

Anna Witt seemed to me, and afterwards to all who have collaborated with us, to be the perfect partner in realizing this project: in fact, working with performances, she is focused on understandings of social dynamics and conventions, how much the individual is capable of shaping the world, and her/his own life trajectory.

Our starting point was to look more closely at moments of Neapolitan history that have profound resonance for the present and choosing a place like the church of Santa Maria del Purgatorio ad Arco and the district of Forcella, one of the oldest in the city, which is in the historical center but which still remains outside and too often marginalized (very graphically the periphery in the center of the city), was to see it as almost a fulcrum or place of translation between contested past and conflicted present, at a time of crisis that of course goes far beyond the city of Naples.

The church has been for centuries part of the life of Neapolitans because of its mission of charity and also for the Cult of the Souls in Purgatory which is well known in the district. Forcella, even if it is close to the church, is outside the popular tourist routes and, despite its historical significance, it still has the too familiar characteristics of a poor and disadvantaged district, while so much of its life is shared in the streets, between people.

At the same as starting our work, we began what became for us a fascinating conversation in Forcella with the Associazione Amici di Carlo Fulvio Velardi ONLUS, a group that is very active in youth education, Anna and I immediately recognized that in our conversations with these groups women were both central and a hidden part of everything that happened: the care of the souls in purgatory was the responsibility of women and the network between children, parents and the community was largely managed by women. It became immediately clear that it is still, even today, women who are the only ones to manage families and that still they do so under the social control of a patriarchal society. So much of the testimony was deeply moving and shared by all who were present.

Together we decided to look, through the shared conversation with this group of women from Forcella, to women from the past, coming to understand them in relation to the present and to present experience. It was for all of us a way to show how much the significance of women’s action in society is still hidden and continues to be made through struggle. It is because of this that we choose to speak in our project about women from the Neapolitan Revolution (Eleonora Pimentel Fonseca e Luisa Sanfelice), ante litteram feminists and activists (Maria Montessori, Lina Merlin), as well as contemporary Neapolitan protagonists who speak for women’s solidarity (Lucia Mastrodomenico), in the hope that we may renew their achievements in the present and for the future.

Looking to this history it was impossible to escape the feeling that while the world has changed in so many ways, women’s struggle is still very much present and, in many ways, it is too similar to what women have lived in the past:  how much of our society is based on women’s unpaid work? And how deeply embedded patriarchy is, as the strongest form of exploitation because still so widely socially accepted! Reading of the past of Naples (one the cultural capitals of Europe in the XVIII century) and listening to the stories of lives lived today in the center of Naples (still one of the major Italian cities) although it’s our familiar reality it never ceases to be shocking that so much of social life and economic production assumes the unpaid labour of women and significantly depends upon the limiting and denial of women’s economic, social and sexual freedom.

The dramatic evidence of this hidden story known to all came back again and again in almost every conversation. But there was evident at the same time the capacity of women to network, to think together, and to work out collective solutions for what was missed in their lives and missed in their welfare and care for the common good. We came to recognize that this is a kind of underestimated strength, as hidden as their social struggle is hidden. It is why the Anna imagined to make them heroic as we more familiarly see the historical women that we were trying to bring into our present.

From this process Anna Witt came to imagine a set of performances in which the care for the souls in purgatory in a practice of faith evolves into an inspiring conversation between the women of today with the histories of women of the past, despite the great period of time that might at first appear to separate them.

Here is an open conversation between mothers and daughters, between the past and the present, that asks what needs to be done, what may we learn from the past, and what the values are of lives which for too long have been lived in the silence of the “narrative of established history”, lives that actually form and make the strength of society and of future generations.

“Trecce in Fiamme/ Braids on Fire (2 channels HD video 2021) is a video installation in which one part is focused on the conversation and, the other imagines the women of Forcella as almost divine creatures capable through sisterhood and solidarity of becoming present in a society which often puts them apart and closes them away, diminishing us all: in fact, the artist has realized one of the videos letting them to perform as heroic women like in classical frescos where the public spaces of their daily lives became the shared spaces in which to affirm their bold struggled lives.

We all thank very warmly the Riot studio for their kind welcome at the Palazzo Marigliano and to Fondazione Morra Greco for their support. 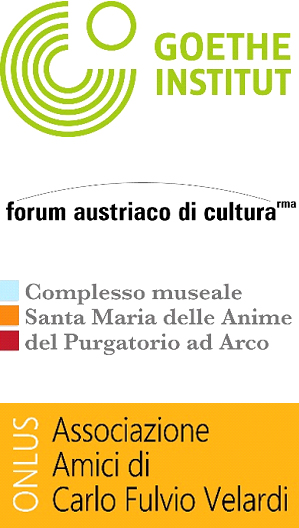 A funny re-adaptation of three mysteries